Stoke-on-Trent is a rich City with an industrial heritage and fascinating history, which presents an inviting opportunity for local businesses to advertise to a valuable audience.

While there are numerous statistics that support the practice of local advertising, there are some that remain more compelling than others.

Did you know that just 36% of global consumers trust large corporations to do what is right in any given circumstance, while 63% would only consider making a purchase from a brand that they considered to be authentic?

Along with the added advantages related to targeted marketing and the development of consumer loyalty, these statistics underline why local advertising in Stoke and similar UK cities remains increasingly beneficial for firms. This is a rule that applies across multiple markets too, regardless of whether you sell products or services to your customer base.

Why Advertise on Billboards in Stoke?

One of UK’s most historical and fascinating cities, Stoke has a deceptively rich heritage that gave the world Robbie Williams, football (the city is home to the second oldest professional football clubs formed as long ago as 1863) and, most famously, pottery. It even gave us one of the most iconic fighter planes of all time, with the chief designer of the Supermarine Spitfire having been born in Stoke’s very own Butt Lane.

The diversity of its greatest achievements reflects the unique nature of Stoke as a city, as well as the open-minded nature of its citizens. So while the city is predominantly British and UK-born residents make up 90.2% of the local population, there are numerous types of business currently active within the region. In fact, the city has come a long way from its origins as an industrial conurbation, serving primarily as a thriving hub for service industries and distribution centres in the modern age. 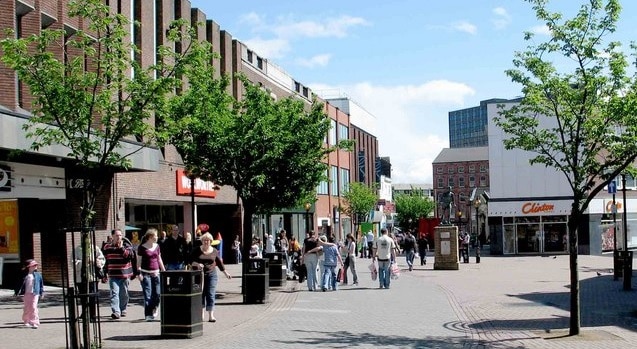 It is also worth noting that the region’s residents tend to be passionate about the sport, with the aforementioned football club Stoke City now firmly established in the Premier League. Speedway is also a popular pastime for locals, with the Stoke Potters having retained popularity even as they dropped into the National League.

As we delve deeper into Stoke’s population and core demographics, we uncover even more reasons for local firms to advertise in the city. According to the 2011 census, Stoke had a population of 249,000 and an even demographic spilt between males and females.

The average age of people in Stoke was 38, and altogether this creates a diverse, young and vibrant audience that should benefit to a host of alternative markets.

A lofty 94.1% of Stoke residents also speak English, which is another boon for local advertisers. In short, it creates access to a huge potential audience, which can drive impressive lead generation numbers over time.

Marketers may also be interested to note that 42.6% of Stoke’s earnest citizens are married, while 56.1% are involved in some form of relationship. This leaves 43.9% who are single, creating an interesting demographic split and multiple opportunities for a host of different products and services.

In Summary: The Natural Advantages of Local Advertising in Stoke

As you can see, Stoke is home to a diverse and natural demographic split that offers an extremely viable marketing proposition for local firms. This also underpins a rich diversity of interests and pastimes in the city, which in turn highlights various forms of advertising through which brands can effectively target specific segments.

Given Stoke’s diverse demographics and relatively low levels of unemployment, however, outdoor advertising remains one of the best ways to advertise in the city. This enables brands to strategically place traditional billboards throughout Stoke, in a bid to target busy and active citizens who are often on the move.

When you also factor in the relatively low cost base of outdoor marketing and its increased levels of engagement, the potential benefits of local advertising in Stoke become hard to ignore.