What are the Best Fonts to Use on Your Billboard? [Updated 2022]

While it’s easy to overlook the description and the size of the font that you use as part of your various marketing campaigns, it’s fair to say that this can have a dramatic impact on how your products or services are perceived by customers.

For example, the under-used ‘Baskerville’ font is considered to be the most trustworthy typeface, which may be ideal for financial-oriented or similar brands that are focused on the delivery of serious services.

In this article, we’ll take a look at the best fonts to use on billboards, while also considering typeface size and how you can optimise the overall design of your ad content.

OK, So Which Typefaces are the Best?

Let’s start with the basics; as we need to initially understand which typefaces are best both from a design and practical perspective.

In general terms, sans-serif fonts are considered to be the best and most widely used, and there are a number of key reasons behind this observation.

For example, this grouping of fonts (which includes popular entities such as Arial Black, Avante Garde and Myriad Pro) are incredibly simple and clean from a design perspective, while their clean and legible lines afford your content a more modern aesthetic. 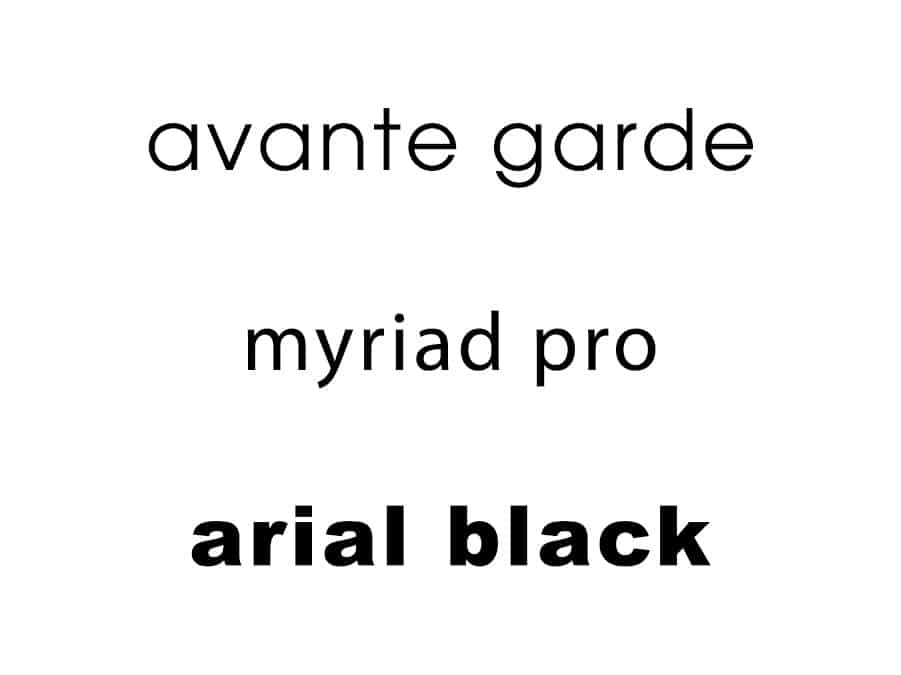 These factors also make sans-serif fonts particularly intelligible, which in turn means that they can be read easily at a distance.

In the case of large-format billboards such as 48 and 96-sheet ads, for example, such content often needs to be legible at a distance of more than 1,000 feet. What’s more, advertisers only have between five and 10 seconds on average to engage passing traffic through a billboard, so crisp and simple fonts like Arial are highly effective in this instance.

Century Gothic is another viable sans-serif font from this perspective, with this incredibly visible and striking even when viewed from a considerable distance.

Which fonts to avoid

Well, there are several that are widely unpopular amongst both customers and marketers alike, with those that have particularly narrow letter-spacing (such as courier) or overly complicated visual styles often cited as being impractical across a broad range of marketing channels.

Other serif fonts can be featured in this category, as these typefaces tend to be more complex and overly artistic in a way that makes them less legible at the types of distance discussed earlier.

Exceptions to these rules

For example, brand logos (which may be given pride of place on billboards in instances where advertisers are looking to build brand awareness) often include slightly fancier and more artistic fonts, but it’s important that you don’t apply the same rule when imparting your ad’s primary, secondary or even tertiary messaging.

The question that remains, of course, is can you mix fonts to combine different typefaces on a single billboard or as part of a wider campaign?

The short answer is yes, but the key here is to strike a keen and practical visual balance. After all, the fusion of different fonts (even in different sections of a billboard) can make your content slightly harder to read in some instances, so design and your precise type of typefaces remain imperative here.

Ultimately, you’re best served by using a single sans-serif style font on your billboards where your brand logo allows, or at least limiting your mix to similar typefaces from the same category of options.

When it comes to selecting a viable font size, it’s fair to say that much will depend on the scale of your billboard ad and its core dimensions.

After all, billboards or OOH ads can range from 6-sheet options (which measure 1800ml x 1200ml) to 96-sheet billboards that measure 3000 mm x 12000 mm, creating differently sized real estate that will be placed in variable types of location.

So, although there’s no exact rule for billboard font size, you’ll typically scale the size of your typeface in line with the dimensions of the ad in question.

Similarly, you’ll need to optimise the size of your font and maximise this in relation to the display size, so that people can view your billboard from a significant distance and each ad can reach as large a target market as possible.

When using as large a font as possible, you’ll also have to focus your mind on creating concise and punchy messaging that conserves space and enables you to get the most from the real estate at your disposal. 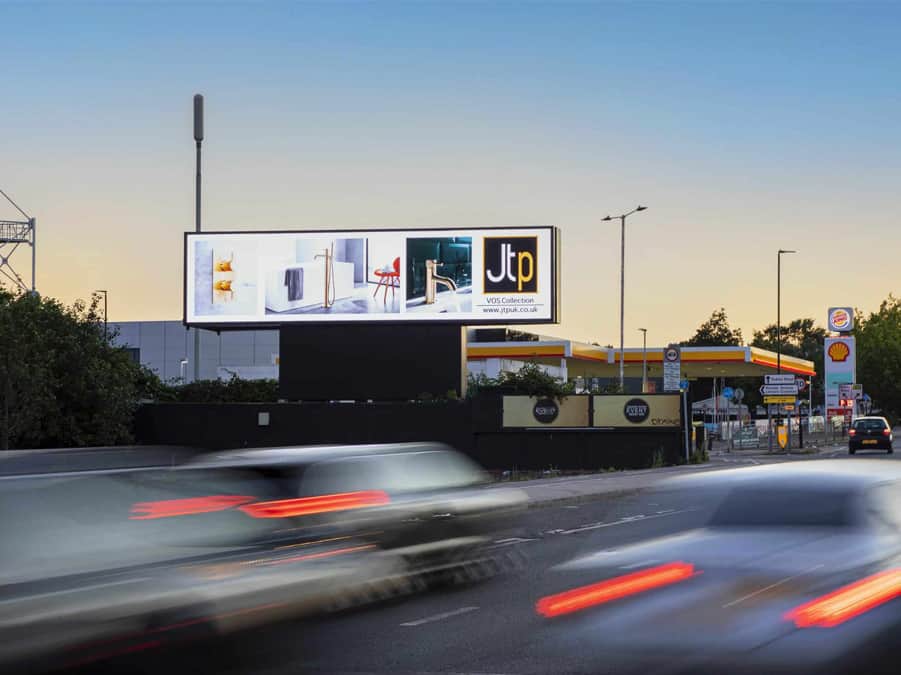 According to some studies, digital signage messages below 250 characters actually boost engagement rates by as much as 60%, highlighting the importance of optimising your font size while maintaining a concise message or headline.

This certainly enables you to deploy an optimal headline typeface of Arial (size 28), which will allow you to strike the balance between visibility and the design of the billboard as a whole.

In terms of word count, this character limit will equate to around six or seven punchy words, while we’d recommend writing in an active tense to create a sense of urgency and impact amongst your target audience.

On a final note, just remember to select your font size in a way that makes the most of the ad space and minimises unused real estate, while avoiding the temptation to lower your typeface size in order to cram in more words or characters.

How Can I Make My Font Stand Out More?

Even with these general rules adhered to, you may also want to take proactive steps that help you to enhance the visual impact of your font and ensure that this stands out on the billboard.

We’ve outlined a few of these ideas below, so that you can incorporate them into the design and production of your ads.

Use Colour Contrasts Where Possible

When you create a brand-oriented billboard, you may want to focus on colours and shades that are synonymous with your brand. This is great for brand recall and recognition, but where possible, we’d recommend that you utilise clear colour contrasts where possible to help create the most striking visual impact. Perhaps the most effective colour contrast is black and white, which is iconic and widely used today. 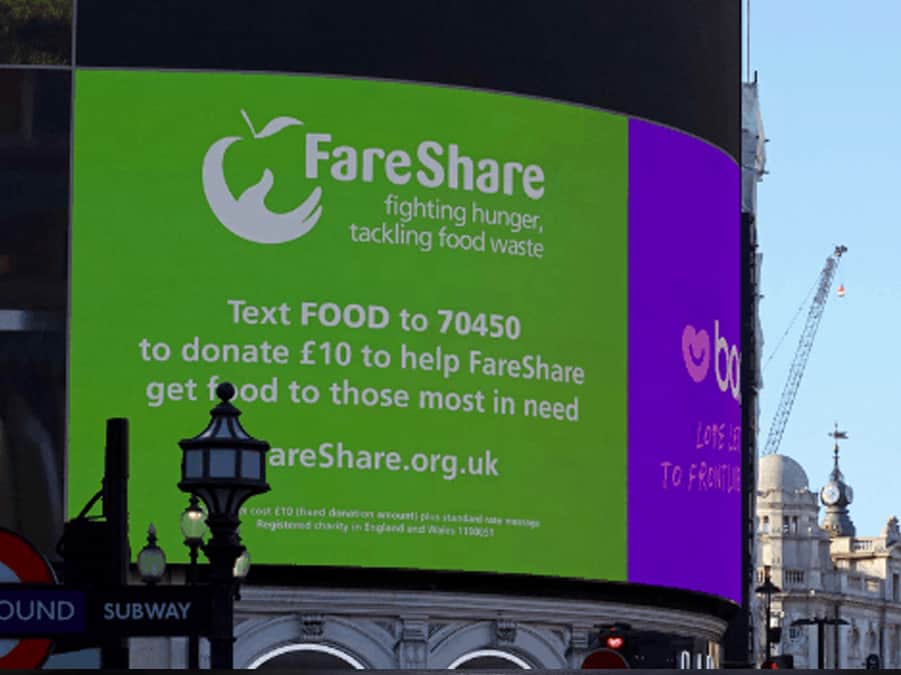 Bold Colours Help to Draw Attention to Your Ads

On a similar note, we’d also recommend utilising bold and vibrant colours where possible to help draw attention to your ad. Once again, these should be relevant to your brand identity, but there’s no doubt that this type of approach will help to capture the attention of target customers and initially engage them in busy, bustling and built-up areas (which are often the best locations from a strategic perspective).

Use Simple and Active Wording Where You Can

As we’ve already said, writing in an active tense can really help to create a sense of urgency in the minds of customers, which is especially ideal when advertising real or limited-time promotions. Similarly, you should focus on using simple and easy-to-understanding messaging on your billboard, so that you can convey your messaging clearly and within a limited time-frame.

The Last Word – Why Copy Alignment is Also Key

Before we go, it’s also important to understand the concept and importance of copy alignment when creating billboards.

This refers to the positioning of your wording and how it aligns with the other visual elements of the ad, which may include an image and your brand logo (which will typically be placed prominently on the billboard).

A good rule of thumb is to ensure that the spacing between a headline and any secondary messaging reflects the distance of a single line of body copy. With this type of attention to detail, you can ensure that all of your content is aligned in a logical and visually engaging manner, as opposed to creating a fragmented visual where the text appears to float as a standalone element.

You should remember that the human brain has a tendency to read from left to right, so be sure to keep this in mind when formulating your design and presenting different types of media to customers.

By following these rules, you can hopefully utilise the right font at the correct size when formulating your billboards, while optimising their impact and ultimately achieving the best possible return on your marketing spend.