How To Create Eye-Catching Billboard Artwork

The concept of ‘standing out from the crowd’ is central to the purpose of advertising, as brands look to leverage various channels to compete directly with rivals and claim a viable share of their target market.

This also at least partially explains the reason why some brands leverage videos to optimise their reach on social media, as this type of material boasts the highest levels of engagement despite comprising just 3% of total content.

Interestingly, out-of-home (OOH) and billboard advertising can also help you to stand out from your competitors, especially when utilised as part of an integrated campaign. But what exactly can billboards achieve and how can you design a knockout billboard for your brand?

Understanding Billboards and Their Core Purpose

Arguably, there are few marketing channels that are as engaging as billboards, which strike the ideal balance between being relatively unintrusive and successfully targeting potential customers at a time when they’re most likely to engage with brands.

Take bus and train station ads, for example, which can be used to target and engage consumers as they make their way home from work in busy metropolitan areas, creating a significant opportunity for fast-food brands and similar entities.

So, before we talk about the artistic element of billboards and how you can create a knockout ad that leverages these natural advantages, let’s consider the general purpose of billboards and the goals that they’re intended to achieve:

Let’s start with the basics; billboards are ideally structured to help create a striking visual impact in the minds of potential customers, either as standalone ads or content that makes the most of the surrounding environment.

This is especially true in the case of 48 and 96-sheet billboards, which are particularly large format adverts that are typically used at busy roadsides and motorway junctions.

These billboards provide large pieces of real estate, on which brands can promote themselves and create a visible platform for their core creative ideas. Bold and contrasting colours also work particularly well when creative eye-catching and ultimately impactful billboards as, but we’ll explore this a little further later in the post. 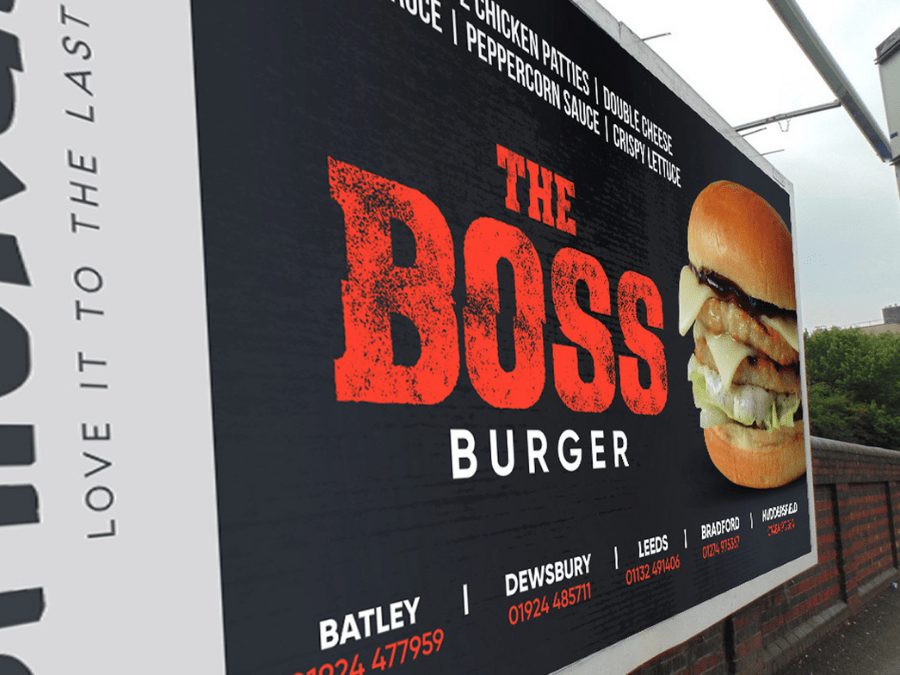 This at least partially explains why OOH media such as billboards are widely used to build brand awareness amongst your target audience, as they’re ideal for capturing attention, garnering a large number of impressions and eliciting further actions from consumers.

Remember, there’s also an inherent link between billboard ads and smartphones, with customers who see an OOH ad considered to be 17% more likely to engage with a particular brand through their mobile device.

Depending on the size of your billboard and the nature of your campaign, you can include primary, secondary and even tertiary messaging to help promote your brand and achieve a specific promotional purpose.

However, the key is that you utilise one or a network of billboards to communicate a clearly-defined message, whether this has been conceived for a single ad or as part of a larger, integrated campaign.

Your messaging must be conceived and developed ahead of time, so that you can use text, imagery and the creative design of your billboard to communicate this as concisely and clearly as possible.

Certainly, billboards work best when they use text and images to holistically communicate a particular message, with this logic reflected by wider marketing statistics.

For example, when people read or hear information, they’re statistically likely to remember just 10% of this data three days later on average. Conversely, people retain up to 65% of the same information when it’s paired with a relevant image, creating a far more interesting proposition for marketers across the board.

This is why execution is so crucial when creating a billboard, as this will have a direct impact on your ability to successfully share a succinct and compelling marketing message.

As we’ve already touched on, OOH and billboards are viable channels when looking to persuade customers to take further action through their smartphones.

However, this rule can be applied to other channels and device types too, distinguishing billboard advertising as one of the most engaging and cost-effective ways to target your audience and optimise the number of leads generated.

For example, a detailed Neilsen report from 2017 found that nearly five-in-10 US residents (46%) aged 18 or over had utilised an Internet search engine to look up information after seeing or hearing something advertised on a billboard.

At the same time, nearly four-in-10 US adults (38%) had visited a Facebook page (or posted a direct message on the site) in relation to an OOH ad, with this channel faring particularly well against other offline marketing channels such as TV, radio and print media. 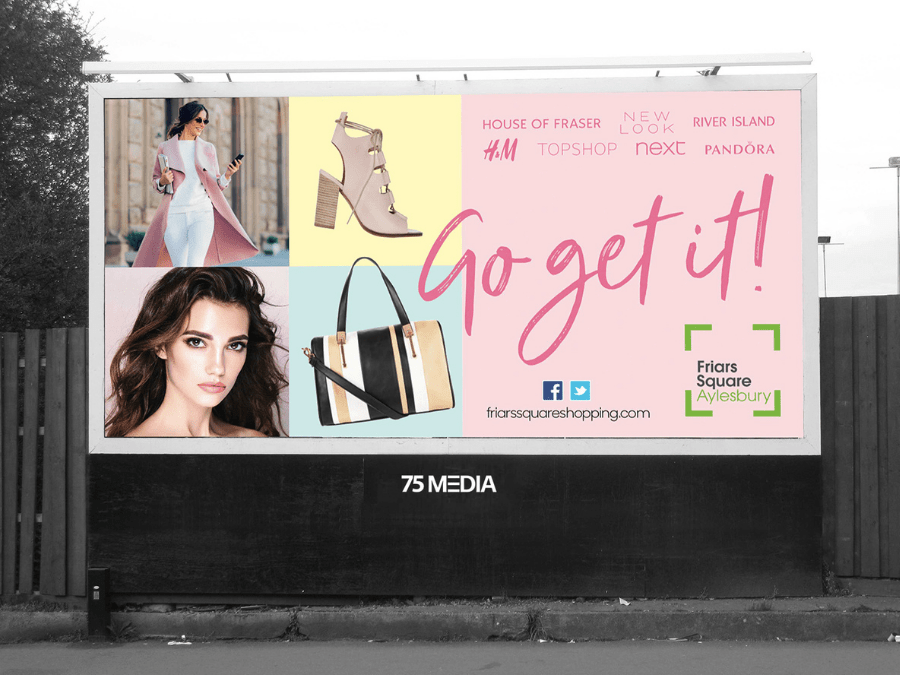 More specifically, OOH media (including billboards) drove approximately 31% of all online activations received through Instagram in 2017, with this at least 4% than the second most-dominant offline channel (television).

The corresponding number for Twitter was 30%, while this share is expected to continue to rise incrementally in the near-term.

Clearly, billboards are becoming increasingly influential in the minds of consumers, particularly those who shop largely online and regularly source information through social media platforms like Instagram and Twitter.

At this stage, we can begin to see the purpose of erecting billboards and the core marketing objectives that they can help you to achieve.

While they may afford you a competitive edge over your rivals, however, the question that remains is how can you execute truly knockout and effective artwork for your billboard? Here are some ideas to keep in mind:

We’ll start with the individual visual elements of your billboard; namely colour, typography and imagery (or photography).

We’ll cover each element briefly below, while asking how you can optimise their appearance and make them work for you!

Colour: Ideally, you’ll utilise colours that can reflect your brand’s visual identity, but as a general rule, you should focus on one or two bold shades that can be combined to draw the eye and capture attention. Try to create a contrast between the colours that you deploy and your backdrop too, making your ad easy to read and process at a glance. We’d definitely recommend that you avoid white backgrounds, as their brightness may distract from your core content and messaging while failing to engage the imagination of customers.

Typography: In terms of your written content, this must be easy to read both up close and at a distance. To achieve this, your font should be a minimum of 18 inches in height on large format 48 and 96-sheet billboards, while we’d also recommend using Sans Serifs fonts that are clean, crisp and typically offer increased legibility at a distance. Your font size should also increase by at least one inch (or 72 pt.) for every 10 feet of viewing distance, while you should avoid using all caps as this diminishes your ad’s contrast and can decrease readability by as much as 10%.

Photography: Most billboards use high quality photographs as imagery, and it’s important to utilise clear pictures that clearly show what you’re promoting. A good way to achieve this is to use large images of smaller objects, while focusing on high-resolution pictures that will appear sharp and bright even at a distance. Also, try to avoid using overly complex imagery or pictures that clutter your space, as you don’t want to confuse the minds of customers or detract from your core, primary messaging.

Recognise the ‘Rule of 3 Visuals’

The latter point leads us neatly onto the importance of simplicity when conceiving billboard ads, especially from the perspective of execution and attempting to leverage innovative and creative ideas.

This is underpinned by the so-called ‘rule of three visuals’, which states that people are typically more visually engaged when they see a group of three items. This is applied to everything from visual merchandising to marketing creatives, with a view to driving engagement and optimising bottom line conversions.

But what does this mean in terms of billboard advertising? In simple terms, it suggests that you should stick to three core visual elements in your creative; namely a single image or photograph, a headline and a reference to your brand’s logo. 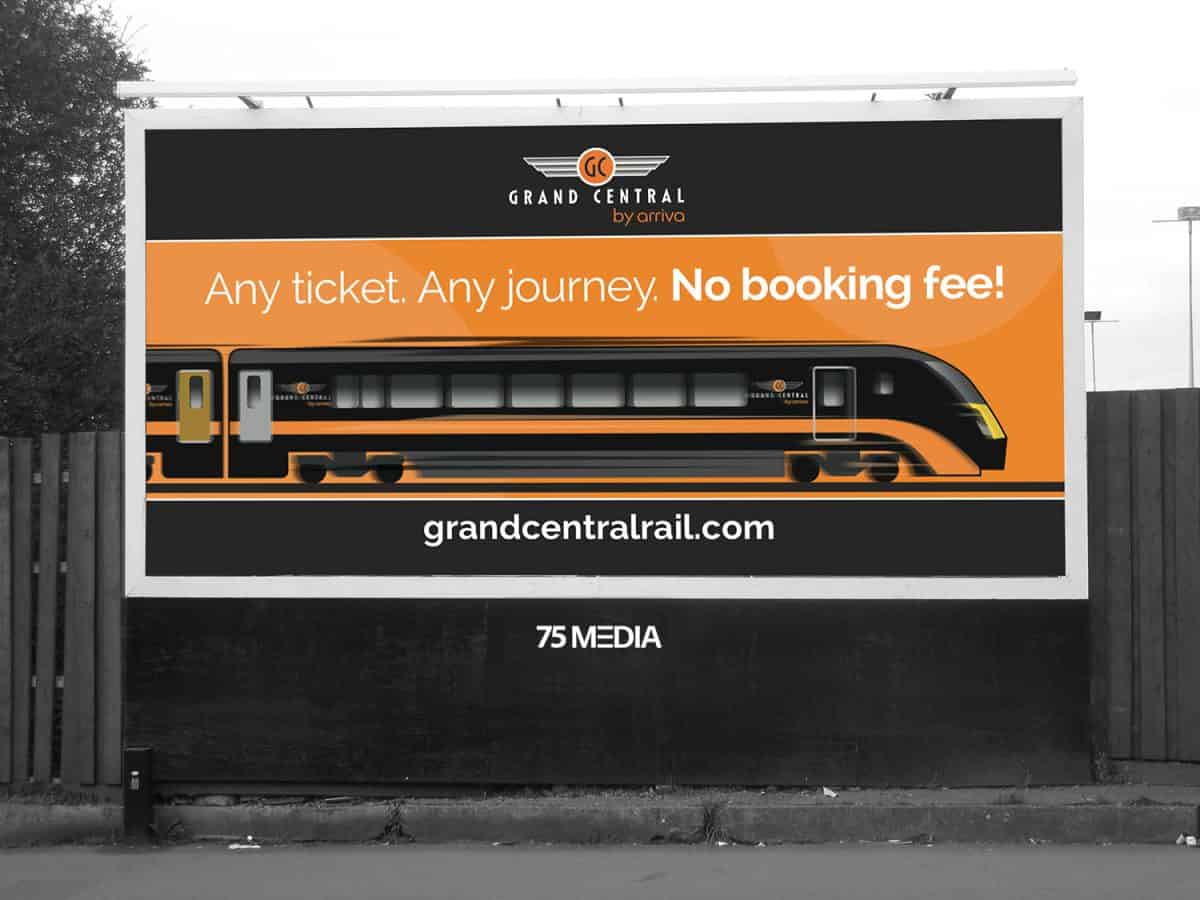 This rule should establish the layout of your billboard and the foundation for your creative brainstorms, while determining finer details such as whether you should overlay text.

This typically requires you to ensure that there’s enough contrast between the colours of your selected image and text (for the purpose of remaining legible), and adhering to the rule of three can help you to follow this unwritten rule and leverage it to your advantage.

We’ve already touched on the importance of keeping your copy short and concise, while writing an active tense can help to promote a sense of urgency amongst customers and potentially optimise the impact of limited and real-time promotions.

But what exactly does this mean in practice? Well, you should ideally limit yourself to just one or two impactful favourites that clearly articulate a primary or secondary message.

In terms of the headline, this should be no more than six or seven words in length, although it’s always better to minimise text where possible and opt for punchy content over choppier and more detailed word-play.

There’s a good reason for this too; as condensing your messaging to fewer than 250 characters can actively boost engagement by up to 60% according to some studies, with this representing a huge improvement that can generate more leads for your business.

At this stage; it’s important to understand that creativity doesn’t always translate into complexity, as the most innovative and impactful billboards typically benefit from inherently simple designs.

In fact, the deployment of concise and simple messaging can genuinely optimise the impact of any creative visual, while ensuring that your ads are completely holistic and capable of delivering on commercial objectives.

Keep Your Ads Fresh and Dynamic

Billboard campaigns aren’t created equal, as while some run for a short amount of time to promote limited-time promotions, others can last for an extended period of time.

Much will depend on the nature of your campaign and the brand, products or services that you’re striving to promote, of course, but there’s no doubt that you’ll have to regularly switch out your ads and content over the course of longer-term campaigns. 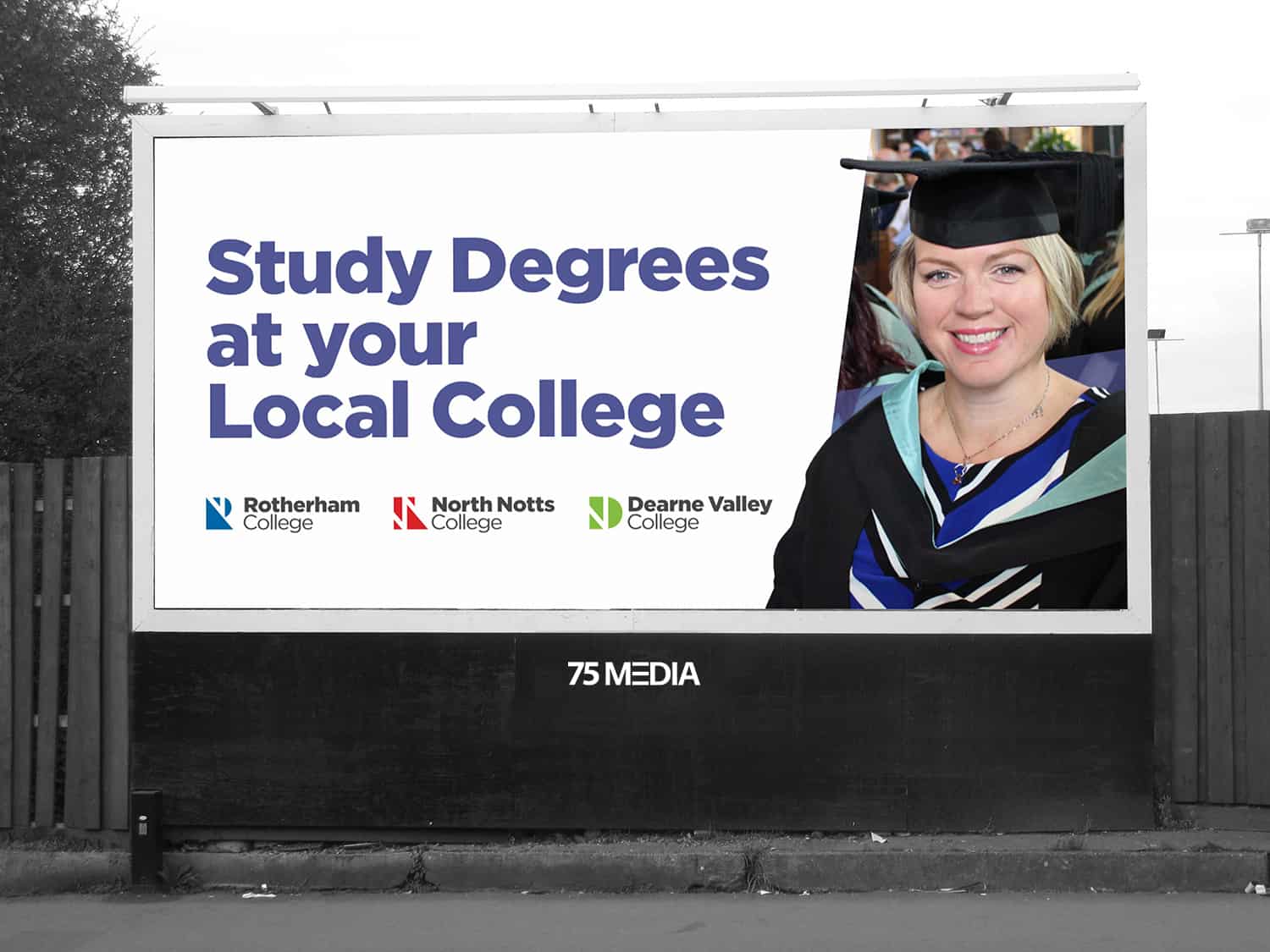 The same principle applies if you erect multiple ads in the same geographical area, which is common when looking to raise brand awareness for local and regional startups.

The key here is to ensure that your ads feature variations on the same visual and creative themes, ensuring that you keep target consumers engaged while simultaneously maintaining a consistent and recognisable brand image.

But why exactly is this so important? Well, in instances where target customers see the same ad or creative too many times, they can become fatigued and even blind to the impact of your messaging.

In this instance, ads can simply blend seamlessly into the background, which is always a risk given the way in which billboards naturally meld into their surrounding environments over time.

From a practical perspective, you should consider tweaking your visuals and headline content on a frequent basis, as these elements can be subtly switched and updated without overly compromising the style or purpose of the underlying campaign.

With this type of approach, you can also ensure that your ads remain effective and engaging over an extended period of time, while helping to continually capture attention in line with the number of impressions that you’re able to generate.

Billboards remain an increasingly important part of any integrated marketing campaign, thanks to their highly engaging nature and innate ability to persuade customers to action.

However, execution is everything when creating your billboard campaign, especially when formulating each ad’s individual visual element and combining these as part of holistic and impactful promotional material.

By recognising this and adhering to the guidance included in this article, you can get your execution right and create the knockout billboard artwork that your brand deserves!