How To Use Outdoor Advertising to Gain Online Publicity

What if we told you that it’s possible to land online press coverage and boost the profile of your brand without necessarily needing to hire an established PR firm to work on your behalf?

This is excellent news for small businesses, who can leverage outdoor advertising (OOH) and digital marketing channels to achieve national headlines without excessive spending.

We’ll explore this further below, while asking how OOH can be utilised to help you gain publicity online.

Getting Started – Why Should you Use OOH for PR?

Let’s start with a simple question; why are businesses encouraged to hire PR professionals?

The answer is simple, as securing local or national press coverage can help to build brand awareness and recognition, while extending credibility to businesses that were otherwise unknown.

This can also translate into a greater sense of trust between consumers and brands, which is another key component of sustainable commercial success. This is borne out by the numbers, which suggest that up to 81% of customers need to be able to trust a brand before buying from them.

Interestingly, OOH media and channels such as billboards can be used to achieve similar objectives, which is why the lines between this medium and PR have become so blurred in recent times.

Ad of the Day: O2 ‘Go green’ by The Marketing Store https://t.co/hFtMqDGZ3a pic.twitter.com/ccq3ra9S1S

Certainly, OOH is designed to help brands to reach large target audiences, both nationally and in local communities (depending on the nature of your campaign). This is particularly true amongst Millennials and younger demographics that are of working age, who typically spend the vast majority of their home out of the home.

According to the Department of Transport, as many as 69% of UK commuters continue to commute to and from work by car. So, businesses can leverage 48 and 96-sheet billboards to target potential customers at the roadside, targeting busy and bustling commuter routes in the process.

In instances where you’re able to reach and engage larger audiences, it’s far easier to build brand awareness and recognition over time.
Outdoor advertising is also one of the most cost-effective and value conscious ways of achieving such goals, particularly in comparison with more established offline channels such as TV and radio.

To put this into context, the cost of securing a single, peak-time advert spot on small digital channels can rise as high as £300, while this only enables you to target a relatively niche audience. Conversely, TV ad spots on widely watched shows like Good Morning Britain can cost as much as £4,000, making them largely unaffordable for the majority of small firms and start-ups.

However, traditional billboards can be secured on two-week bookings in permanent, high-traffic locations for as little as £150, minus production and development fees. Further discounts are available for extended bookings, creating a far more appealing value proposition for businesses across the board.

The sizable reach of OOH when compared to alternative offline channels was also borne out by research conducted by Nielsen in 2017, which found that nearly five in 10 respondents aged 18 or older (46%) had used an online search engine directly after interacting with a billboard.

A further 25% had interacted with a brand on Instagram after seeing such an ad, while 23% followed up through the business’s Twitter profile.

So, outdoor advertising is clearly effective at landing links to your website and boosting SEO performance as part integrated marketing campaigns, while it’s also one of the most effective offline channels when it comes to engaging customers through social media.
As a result, OOH can be used to build awareness across a broad range of digital channels, while creating trust amongst potential customers. And if you create a buzzworthy enough ad, it could even secure you press coverage!

Back to the outdoors, for people and advertising https://t.co/24QogX2ANc pic.twitter.com/0zwYR3Vt5B

As we begin to understand the role that OOH can play in driving an effective PR offensive, the next step is to plan your campaigns and create a solid foundation from which to succeed.

You should kick-start this process by setting one or more clearly defined objectives, pertaining to both the core components of your campaign and the wider goals that you want to achieve for your business.

For example, the initial goal of your campaign may be to land local or national press coverage, creating the need for you to understand precisely how outdoor ads can help to build such high levels of awareness.

However, you may also want to achieve other objectives as part of this thought process, each of which will further impact on the composition of the campaign and the type of messaging that you use.

As we’ve already touched on, you may want to create an OOH campaign that simultaneously adds value to your SEO efforts, particularly as this will also increase online traffic and the number of leads generated.

Similarly, you may want to improve the quality of leads that you generate on a daily basis, in a bid to boost sales conversions and achieve a superior ROI on your marketing spend.

Regardless, the key is to set out these objectives clearly from the start, before prioritising these and establishing a viable campaign budget.

This, along with a clear understanding of your target market and their behavioural trends, can help to inform the finer details of your campaign and plot an optimise journey for your customers (we’ll have a little more on this later).

As we’ve already touched on, your core objectives and the profile of your target market will have a huge influence on your creative efforts, but analysing such data is only part of developing PR worthy billboard ads.

So, we’ve outlined some helpful hints and tips below, so that you can develop attention-grabbing billboards that compel your customers to take further action! These include:

Get Creative and Stay Relevant

If we cast our eyes over the best and most innovative OOH campaigns of 2020, we can see that none of them adhere to a single theme, style or design template.

However, they are bound by an innate sense of creativity, whether this manifests itself in the underlying messaging or the cutting-edge technologies that may be integrated into individual billboards.

Regardless, the underlying goal is to design a creative billboard that will get people talking, with elements such as humour and topical relevance providing particularly engaging hooks.

For example, political campaigners ‘Led by Donkeys’ have continually utilised billboards to highlight the hypocrisy of those who campaigned to leave the EU, by leveraging simple designs that display the words and broken promises of prominent political figures. 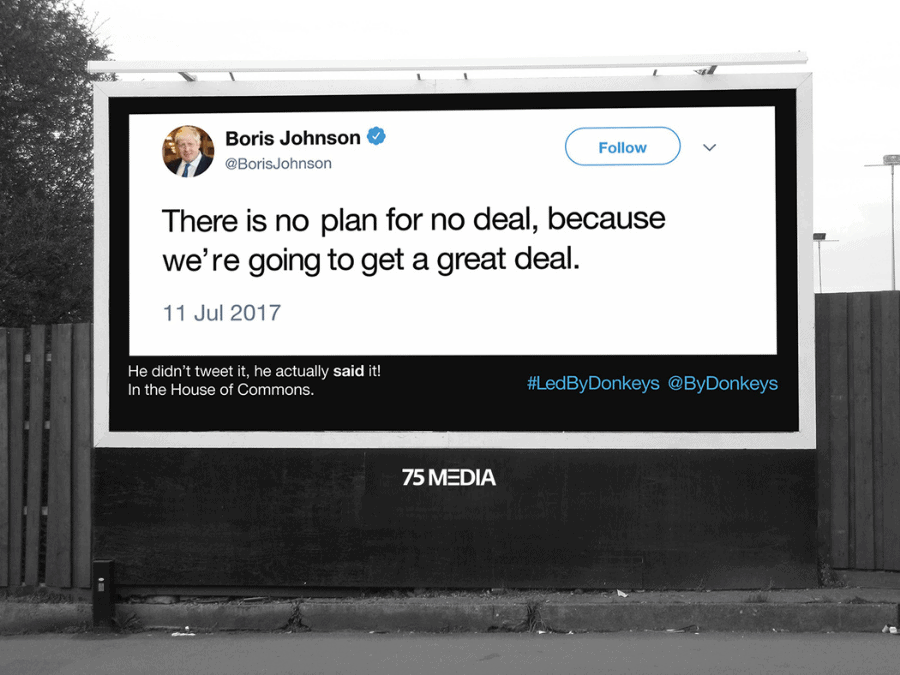 The group ran into some initial obstacles relating to planning permission, while some agencies even refused to sell them advertising space (after initially agreeing to operate as hosts) as their messaging was “too political.”

However, the stark and topical nature of the group’s efforts gained national attention both on and offline, triggering a crowdfunding campaign that enabled them to enter the market for paid ad space.

Similarly, the tongue-in-cheek ‘Date Mark’ website came to national prominence following a local billboard campaign in Manchester.
This started out as a simple mission to find Mark Rofe a girlfriend, with the man himself initiating a novel traditional billboard campaign that utilised the type of self-deprecating humour that has been synonymous with British culture for generations.

The fun and light-hearted nature of the campaign led to 195 referring domains to his website, highlighting the ability to drive online press coverage through outdoor advertising placements.

This immense success also attracted the attention of those further afield, with BBC News and the Evening Standard both providing national press coverage of Mark’s tongue-in-cheek quest for love. 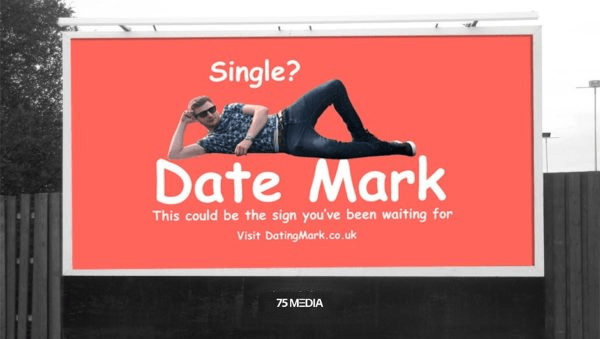 Clearly, certain types of humour and politics are ideal for creating PR worthy OOH campaigns, with these elements also helping individual billboards to transcend regional restrictions and the differences between different demographics.

Other topical and attention-grabbing themes include sustainability, with one particular 2020 campaign in Shoreditch offering a prime example.

This placed a plantable living billboard at the heart of a novel, four-week OOH campaign, with this comprising hundreds of recycled pistachio stems which gradually fell away over time.

As they did so, they revealed the sustainable ‘Go Green’ message, with this helping to captivate passers-by and create a unique buzz that spread both on and offline.

Ultimately, the combination of creativity and relevance will optimise the impact of your OOH ads, particularly in terms of attracting attention and driving press coverage across the board.

Make Sure That Your Campaign is Unique

On a similar note, you must make sure that your OOH campaign is truly unique, either in terms of its messaging, purpose or the materials used to bring the content to life.

The importance of this was also borne out by one of the best campaigns of 2020, in which Chinese technology brand Huawei utilised binaural recording to create immersive and fully sensory consumer experiences.

Binaural recording uses two hidden microphones to generate three-dimensional sound, while it also successfully replicates the way in which the human brain processes and understands sounds.

As a result, the ‘Sonic Escapes’ campaign combined advanced audio and vivid colours to transport viewers to some of the world’s most exotic locations; namely Jamaica, Mexico and Morocco. The campaign was also authentic and highly engaging, and capable of intriguing people across a wide range of demographics.

Like O2’s ‘Go Green’ billboard, this campaign also created a unique premise built around the core composition of the ad, compelling potential customers to interact with the media and creating the type of attention brands are willing to pay significant amounts of money for.
This is definitely something to keep in mind, especially if you invest in a digital billboard and are required to share advertising space with up to five different (albeit non-competing) brands.

Does Your Ad or Campaign Tell a Story?

Historically, ads were created to sell a specific product, range or service, with an almost myopic focus on optimising sales and turnover.
While there’s nothing necessarily wrong with such a perfectly sensible goal, it won’t land you press coverage, and a standalone product ad doesn’t have to align holistically with a brand or within a wider, integrated campaign.

Not only this, but good PR is also based on the notion of sharing a brand’s narrative over time, so that customers become familiar with the company as a whole and potentially develop a sense of loyalty over time.

So, if your OOH ads are to drive press coverage and help build relationships with customers over an extended period of time, they’ll have to narrate a compelling story that reflects your brand and its underlying values.

With this in mind, it’s best to conceive and develop a series of OOH ads, which fit well within an overarching campaign and build a narrative around your brand’s ethos or development. Of course, you can also create narratives around individual products and services, so long as you focus on the visual art of story-telling and utilise concise copy to its fullest potential.

On a final note, effective storytelling requires your OOH ads to be visually consistent, particularly in terms of their brands, colour palate and fonts.

So, even as your written content and messaging changes, each ad remains recognisable and synonymous with a particular brand.

There’s no doubt that outdoor advertising and PR can work together perfectly to drive local and national press coverage for your brand.

Hopefully, this post will help you to create OOH campaigns that can drive good and organic PR, while enabling your business to achieve the optimal value for its investment!