Few political issues of our time have polarised opinion quite like Brexit, with talking points such as democracy, free speech and hypocrisy exacerbating the divide between leave and remain voters nationwide.

Notions of free speech and hypocrisy are particularly relevant, as they’ve underpinned the entire Brexit campaign and lead to increasingly tribal clashes between both sides of the argument. They’ve also inspired a recent PR campaign by the pro-Remain activists Led By Donkeys, which aims to highlight the hypocrisy of leave politicians and those who have led us to the precipice of a no-deal Brexit.

We’ll explore this campaign below, while asking how the group are spreading their message across the UK.

Who are Led By Donkeys and What’s Their Purpose?

As we’ve already mentioned, Led By Donkeys is a pro-Remain activist group, and one that’s primarily active on Twitter and large format billboards nationwide.

The group has railed passionately against the Brexit predictions, highlighting lies and half-truths made by those in charge of our exit from the European Union, rendering these soundbites as Tweets before publishing them on 48-sheet billboards.

BOOM! We’re throwing their exact words back at them. Our UK-wide ad campaign – paid for by you – just launched in Leeds (50/50 in ref). Many more places to follow. We’re turning Brexiteer quotes into tweets & slapping them on billboards. #LedByDonkeys
>>> https://t.co/b8z7ZxwAJ2 pic.twitter.com/RQRNxtQdOi

The clear objective has been to expose the machinations of some politicians, while also laying the hypocrisy of these individuals bare for everyone to see.

The group has also built a strong foundation of support in the UK in recent times, achieving its £10,000 target on the Crowdfunder website in less than three hours. It also managed to pass the £50,000 threshold in just 36 hours, while it’s now raised over £69,000 and earned 2,895 supporters.

Led By Donkeys also has more than 35,000 active followers on Twitter, with this user base helping to spread their message and raise considerable awareness nationwide.

What’s the Nature of the Campaign?

In many ways, the ease with which the group has raised funds highlights the underlying sense of frustration that exists among Remain voters, who have observed their elected politicians lie routinely in order to present a false and unobtainable Brexit utopia.

As a group spokesperson observed, the Brexit fall-out has been akin to “watching a bank heist and seeing the getaway car screech away and nobody chasing them,” and this has only served to create a sense of despair and surrealism surrounding Brexit.

Current Number 10 incumbent Theresa May has also come under fire, as has Trade Minister Liam Fox (who tried to claim that “the free trade agreement that we will have to do with the European Union should be one of the easiest in human history.”)

Interestingly, one billboard also highlighted the blatant hypocrisy of prominent leaver Jacob Rees-Mogg, who in 2011 championed the idea of hosting a second referendum to determine the precise terms of the exit agreement. He’s now vehemently opposed to the notion of a second referendum, claiming that Britain would be better served by exiting the EU without a deal.

These billboards are simplistic in their design but extremely effective, using large format billboards to allow words of targeted politicians to take centre stage and receive the proper scrutiny that they deserve.

By quoting politicians directly and presenting these on a relatively stark background, Led By Donkeys is reinvigorating remain voters and encouraging us to discuss the lies that defined the leave campaign.

Spreading the Word – But why has the Group Ran into Obstacles?

Despite its growing following and fascinating premise, the group has encountered a little difficulty when attempting to spread its messages on a national scale.

While none of the political targets have raised objections or even issued a statement in response, the initial billboards erected by Led By Donkeys were quickly removed due to issues with permission.

Since then, the crowdfunding campaign has enabled the group to enter the market for paid advertising space, as they’ve actively sought large format billboards on which to publish their quotes.

However, they received a further setback when marketing leading billboard firm JCDecaux refused to sell them advertising space as their message was “too political”. This was after the service provider initially agreed to host the billboards, before retracting the offer due to a longstanding policy not to host political advertising.

Led By Donkeys has since found a voice in the form of traditional billboards with 75media.

The first collaboration will take the form a live campaign that’s launched from January 28th , with the activists resurrecting 48 billboards in diverse locations such as Solihull, Dover and London. 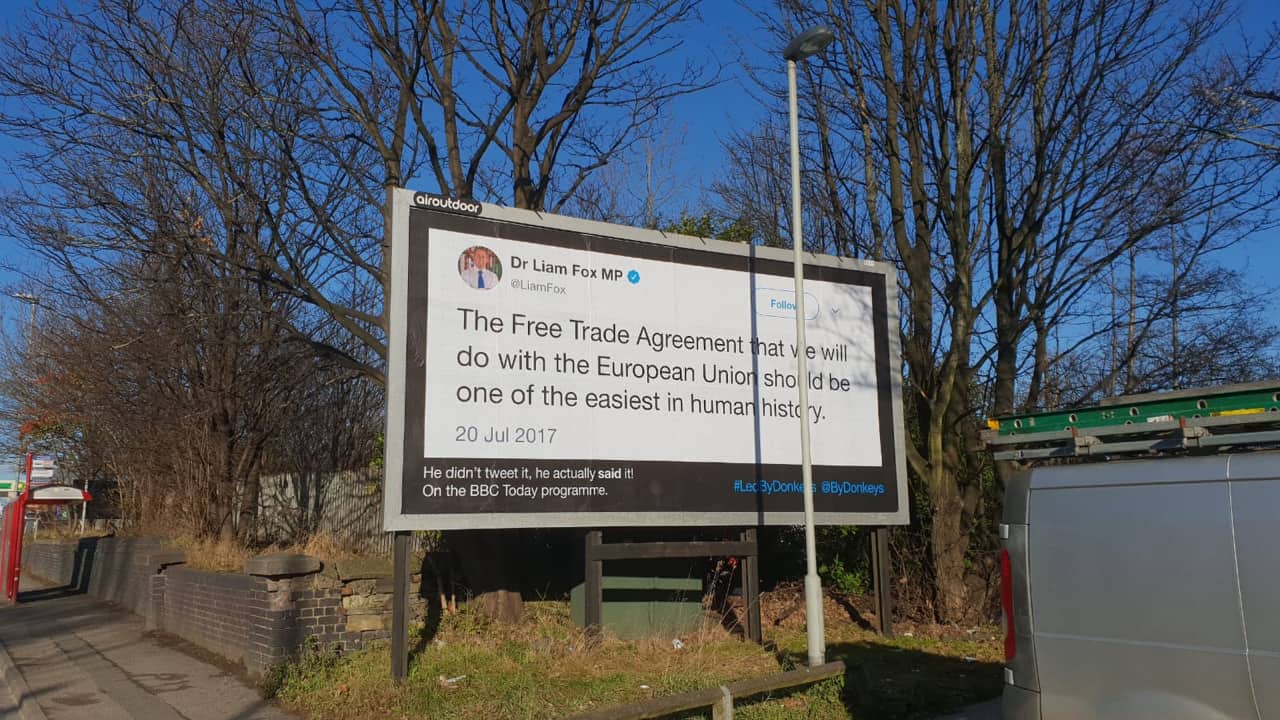 More of Brexit’s key players are likely to feature as part of this campaign, including Rees-Mogg and former London Mayor Boris Johnson.

This is great news for Led By Donkeys, whose message and stark billboard campaigns have continued to reinforce the questions that remain about the Vote Leave campaign and the machinations of its leaders.

The contents of this campaign are those of the advertiser and NOT of 75media or its staff. 75media makes no comment on the campaign but simply wishes to provide a voice to any legitimate group wishing to use its network.