Types of Out-of-home Advertising – A Guide for Businesses

Out-of-home (OOH) advertising represents a genuine growth market in the digital age. Recent figures seem to bear this out, with the industry having reported year-on-year growth of around 18% at the end of 2016. Similarly, the latest statistics saw UK firms increase their digital OOH advertising spend by around 20% during the last 12 months, with this heady proportion coming from just 10% of physical assets in some instances.

This highlights the potentially lucrative nature of OOH advertising, which includes a number of particularly generative and profitable channels.

But not all OOH channels have been created equal, so you’ll need to understand each one in detail if you’re to successfully leverage outdoor media.

In this post, we’ll appraise the different types of OOH advertising, in terms of how they work and their impact on your businesses bottom line.

When it comes to OOH advertising, this marketplace is dominated by billboards. These adverts, which come in various sizes and can be deployed at strategically targeted outdoor locations, strive to target customers on the move and engage in them in an entirely non-intrusive manner.

The OOH advertising sector generated a cumulative revenue of £46.7 million at the end of 2016, with roadside billboards (including traditional and digital adverts) accounting for £17.6 million and claiming a market share just shy of 38%. 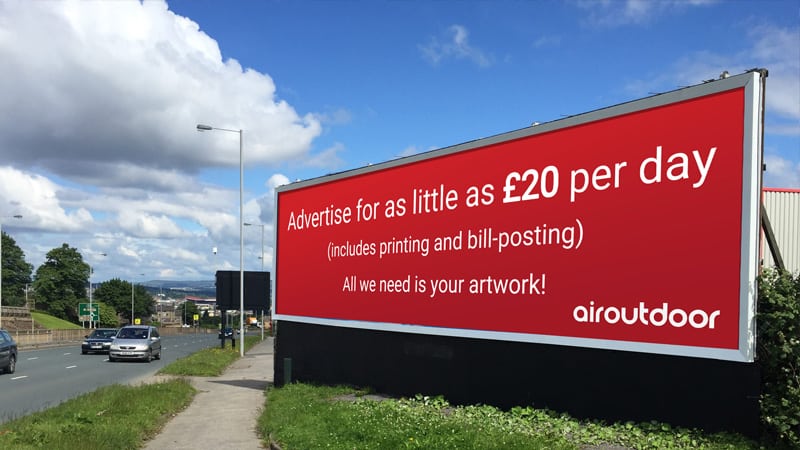 The appeal of these adverts continues to grow with every passing year, as billboards are considered to be exceptionally engaging and capable of delivering a superior ROI. Studies suggest that 71% of consumers interact with the messages shared through traditional and digital billboards, while it’s estimated that nearly 26% of customers have visited a website in direct response to seeing a billboard campaign.

Not only do these figures confirm that billboards can effectively engage a targeted audience, but they also reaffirm the idea that they’re capable of eliciting a direct response from customers across web, social and email channels.

How much does billboard advertising cost?

The ROI delivered by billboards depends on how you structure your campaign your choice of locations, as these factors will have a direct impact on costs. Prices also vary between digital and traditional mediums, while rates are usually charged according to a standard, two-week booking fee.

In general terms, a two-week booking for a traditional billboard placement will cost between £475 and £695, including a fixed production fee. In contrast, a two-week digital booking will set you back an average of £1,250, with those placed in prime locations that offer access to the highest rates of footfall may be subjected to additional price premiums.

These variations aside, it’s estimated that OOH media performs at three-times its relative ad spend, with billboards key drivers of this trend. If you’re able to minimise costs further with a well-thought out strategy, you can enjoy an ever greater ROI through your billboard campaign.

Then we come to point of sale displays, which target customers directly at locations where retail transactions are carried out.

POS displays use emotional triggers to drive impulse purchases. It is also based on the accepted principle that a staggering 75% of our buying decisions are made in-store, which in turn suggests that customers are especially susceptible to emotive, in-store promotions.

As brands have come to understand the science of consumer behaviour and their impulsive decision making, point of sale advertising has become increasingly influential. In fact, eight of 10 marketers rank point of sale advertising as being among one of the most seminal OOH channels in the modern age, ahead of increasingly outdated offline alternatives such as television and radio.

Make no mistake; the rising influence of point of sale advertising is central to the continued relevance of physical retail stores, as it remains exceptionally difficult for online channels to target real-time customer emotions in the same way.

There’s no fixed cost for point of sales advertising, while the precise cost to your business will depend on the number of units that you require per store. Similarly, there’s a wide range of basic and relatively lavish POP displays, so you’ll also be required to pay a premium for the most lavish adverts.

Fortunately,  there is a basic formula that can be used to provide basic budgetary and cost guidelines. Let’s assume that you require a customised POP display manufactured from corrugated board (which exists as a popular, entry level option for businesses), and that this is a temporary advert that is designed to last for less than a year.

In this instance, you can take 50% of the retail value of a chosen product and multiply this by 8%. This will give you an average cost for a non-recurring, POP display, which can then by multiplied across a specific number of locations and sites to create a total costing. The main advantage of using this equation is that it enables you to establish your total outlay and an individual cost per unit, so you can make an informed decision that suits both your budget and a desired ROI on specific products.

This is just a guideline, of course, but it affords you clear understanding of cost before you begin to experiment with variables.

Next up is transit advertising, which is another channel that’s becoming increasingly popular in the modern age. This niche is dominated by adverts that are placed inside or on modes of public transportation, including buses, trains, trams and non-private hire taxis. It’s also possible to placed adverts on subway cars, in order to target customers on the move and engage them at a time when they’re actively seeking advertising content.

This type of advertising can be particularly effective too, reaching an estimated 92% of the population on a weekly basis.

At this point, it’s far to say that there is a clear crossover between transit and billboard advertising. After all, the former also includes adverts placed at bus shelters and train stations, while marketers will often use smaller billboards to target customers at these locations. The rise of digital and LCD display within this sector has blurred the lines between these two practices further, although they definitely remain stand-alone entities in the existing OOH space.

Transit advertising is also increasingly influential to the Millennial demographic. After all, this consumer group is known to be resistant to intrusive, online ads, and remains far more likely to be successfully engaged by honest and organic messaging that blends into the natural environment.

How Much Does Transit Advertising Cost?

As this market becomes increasingly competitive, it’s fair to say that the cost of transit advertising has fallen in recent times. Prices have also declined as regional agencies have formed partnerships with local bus companies, resulting in discounted advertising spaces and cost savings that have been shared directly with clients.

Prices tend to vary from one region to another, but as a general rule you can secure a full side bus advertisement for around £159 per week. Advertising on the rear of a bus will set you back an estimated weekly sum of £149, while a placement on the so-called ‘super square’ space in the middle of a vehicle has a competitive average price of just £79.

For those on even smaller budgets, it’s possible to place an advert at eye level on the pavement-facing side of a specific vehicle. This costs just £39 on average, but it has the advantage of engaging customers by the roadside and encouraging high levels of interaction.

Once again, these prices are only to be used as a guideline, but it’s important to have a basic foundation of knowledge before negotiating with agencies if you’re to secure the best possible deal.

Brochure and leaflet distribution remains a surprising effective tool (particularly for small businesses). A key component of direct mail marketing, these techniques have proved increasingly popular as the quality of printed materials has improved and businesses have embraced more creative ideas.

Brochures and leaflets can be printed and distributed within specifically targeted areas, in order to reach selected demographics. The statistics also suggest that modern campaigns are driving a relatively high engagement rate among recipients, with 79% known to at least glance at materials before either keeping them or passing them to a friend.

The most successful publications tend to offer tangible value to recipients, in the form of real-time discounts, in-store coupons or a limited-time deal. This is also reflected by the figures, as while an estimated 23% of recipients read brochures and leaflets in detail, this number increases to 33% for publications that include actionable offers and coupons.

Distributing print materials that also offer customers access to free samples are also effective, particularly as around 71% of potential recipients consider this to be an excellent way of appraising a businesses available products or services.

Despite the perceived decline of direct mail, brochures and leaflets are considered to be far less intrusive than email and remain a viable OOH advertising tool in 2018.

What About the Cost?

If there’s one perceived drawback associated with brochures, leaflets and print media, its the additional required to created and distribute content. These costs can generally be split into three categories, namely design, printing and regional distribution.

The use of email can eliminate these costs entirely, of course, so this is a serious consideration for small businesses that are operating on a reduced budget.

Still, the actual cost of designing a basic leaflet or flyer is relatively low at just £60, depending on the hourly rate of your chosen designers. This will increase in the case of brochures, which are usually used to showcase high-end products and require a far higher print quality. These costs can be offset by a potentially higher consumer spend, of course, so it’s important to tailor your choice of publication to the product or service that you’re hoping to sell.

If you’re more interested in delivering a simple message rather than focusing on a complex design, you can conceive your publication in-house and eliminate this cost completely.

The cost of printing depends on a number of factors, such as the size of the publication, the range of colours used and whether or not the finished product is one or two-sided. Choosing between a gloss and matt finish can also have a considerable impact, both in terms of quality and the bottom line cost. You’ll also need to look out for variable tax rates, as while some leaflets and brochures will not be charged VAT, those that include promotional offers and any other kind of financial incentive will usually see the standard rate of 17.5% applied to print costs.

When it comes to distribution, much depends on your chosen method of getting your message to the public. One of the most cost-effective ways is to invest in a shared distribution plan, which will deliver your publication along with up to four other documents in a specific area. This costs an average of £30 per thousand documents, while it’s important to note that your leaflet or brochure will only ever be distributed with non-competing messages.

When dealing specifically with leaflets or inserts, you can also use local newspapers to distribute materials. Media outlets charge around £20 per thousand items to deliver your leaflets, although this method does raise concerns about reliability, accountability and the ability of the message to reach target consumers.

So there you have it; four of the most popular OOH advertising channels and their average cost.

Ultimately, your choice of channel will depend on numerous factors, most of which are variable and unique to your own circumstances.

Still, it’s important to understand your full range of options, so that you can develop genuine insight into the marketplace and make a truly informed (and generative) decision.