How to Promote Your Charity Through Out of Home Advertising

The number of registered charities in the UK has continued to rise in recent times, reaching its highest level in more than a decade at the end of 2017. On the 31st December of this year, a total of 168,237 nonprofit organisations were operating nationwide, and this number is likely to increase further in the future.

In many ways, entities of this type are worlds’ apart from big corporations and commercial ventures. However, both nonprofits and businesses are required to generate cash if they’re to achieve their objectives, whilst they must also create strategies that enable them to promote their activities and engage target audiences.

However, charities are bound by much tighter budgetary constraints when marketing their work and their cause, which is one of the reasons why out-of-home (OOH) advertising offers such tremendous value. Here, we’ll look at the benefits of OOH advertising for charities and ask how you can leverage this medium for the greater good!

Why is OOH Media Ideal for Charities?

Let’s start with the basics; as the limited financial resources available to charities mean that they cannot afford to spend too much on their marketing campaigns.

However, OOH media includes competitively-priced channels such as traditional billboards, which in the best-case scenario can be secured on 12-month bookings for as little as £21 per day.

To put this into some form of context, the average SEO campaign (which would look to increase charities online profile and drive targeted traffic to their website) costs between £750 and £2,000+ each month. So, whilst the Google Ad Grants initiative enables some nonprofits to qualify for free paid search ads, the long-term cost of targeting customers online can be prohibitive.

In the case of mediums such as radio advertising, there are other variables that can inflate the cost of a successful advert. Take the so-called ‘opportunity to hear’ (OTH), for example, which refers to the frequency with which your audience will hear your advert and has a direct impact on the price that you’ll pay for a slot.

So, if you want to share a charitable message with your target audience during a prime-time slot, your nonprofit will have to pay a significant premium for this.

Even in the case of digital billboards, a single, two-week booking may be priced beyond the reach of most charities. In fact, this can cost between £1,250 and £2,000 on average, so traditional ads definitely provide more viable and affordable alternatives.

Billboards are also trusted advertising platforms, particularly amongst younger demographics and Millennials. The latter is now arguably the most influential spending demographic in the UK, with its youngest members have now come of age and reached adulthood. 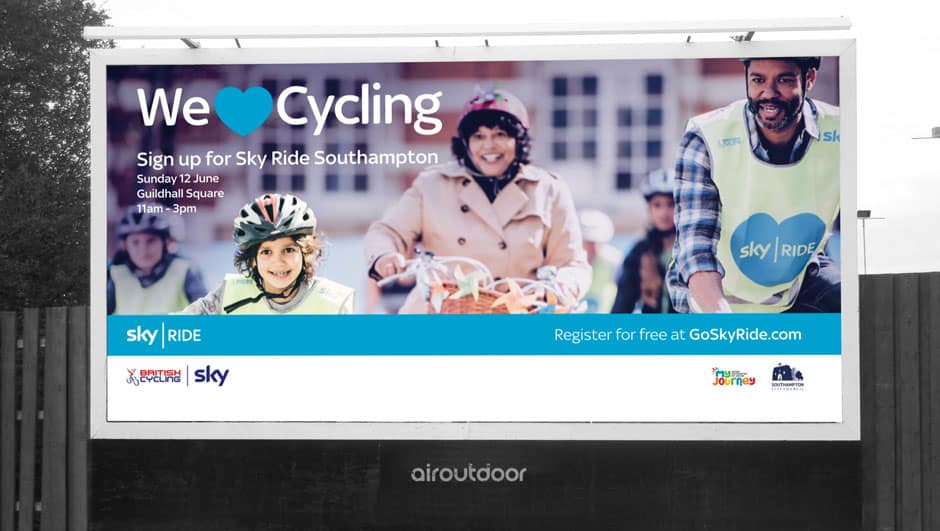 If nonprofits want to target Millennials effectively, traditional billboards undoubtedly offer one of the most viable mediums. After all, it’s estimated that 56% of Millennials trust traditional iterations of OOH media over online banner adverts, which are thought to be intrusive, irrelevant and have triggered a significant rise in the use of ad blockers in the UK.

This enables charities to achieve far higher levels of engagement amongst their target audience, whilst building a strong communication platform from which they can really drive social change.

It can also be argued that traditional billboards are the single most impactful and hard-hitting advertising channel, particularly in the case of larger-than-life 48 and 96-sheet ads.

Make no mistake; numerous nonprofits have leveraged the reach and visual impact of large form billboards to promote genuinely powerful messages amongst their audience, with the mental health charity C.A.L.M providing a prominent case in point back in 2018.

This nonprofit organisation represents a movement against male suicide, which is the single biggest killer of men aged under 45 in the UK and claims the lives of three males under the age of 35 every single day.

These bright and eye-catching ads combined street art and traditional billboards to raise awareness of its work, in collaboration with the well-known graffiti artists Soulful Creative.

The campaign combined three roadside billboards in selected locations, using the everyday identities of Tom, Dick and Harry to highlight the reality and scale of mental health concerns in the UK.

This type of visual impact is arguably only possible with OOH media and traditional billboards, which are capable of bringing social issues into the mainstream and creating huge exposure for specific campaigns.

OK – So How Can I Leverage OOH Media to my Advantage as a Nonprofit?

These are just three of numerous benefits associated with OOH media and billboard advertising, but they’re definitely the most relevant to nonprofit organisations in the UK.

With this in mind, the question that remains is how your charitable organisation can leverage OOH media successfully? Here are some tips to help you on your way!

We spoke earlier about the cost advantage that traditional billboards offer over digital alternatives, but the former also boasts a more competitive ROI in terms of exposure and impressions.

This has much to do with the way in which each type of billboard works, with traditional ads providing space to individual advertisers and messages on an exclusive basis. So, there’s no need to share promotional space with anyone else, which means that your message will not be diluted or lost amongst the noise and clutter. 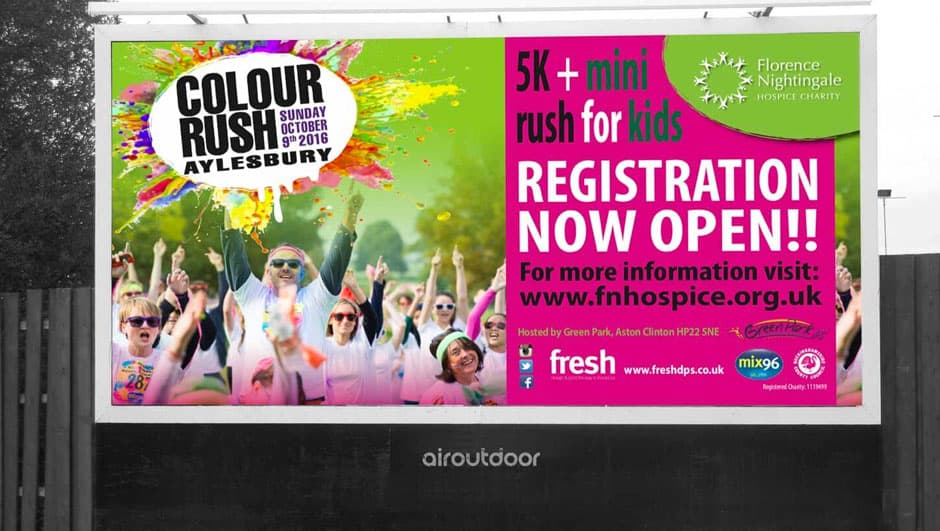 In contrast, digital billboards usually rotate between a total of six messages during each 60-second period, as advertisers share space and compete directly for the attention of passers-by.

In short, this restricts advertisers to just 10 seconds of visibility for every minute that passes, creating a scenario where their exposure is minimised and their potential ROI diminishes over time.

Of course, we’re not talking about a financial return in the case of nonprofits, but there’s no doubt that traditional billboards will enable charities to optimise exposure, create more memorable messaging and increase the number of impressions achieved within targeted locations.

Whilst small businesses often start out by targeting customers and building a consumer base within the local areas, most charities are able to engage donors throughout the UK in a bid to boost their activities.

In fact, London remains the Holy Grail for nonprofit organisations, as the capital boasts the highest level of donors in the whole of the UK.

It’s also a busy and thriving metropolis and one that’s home to a diverse range of people within different demographics.

London is certainly a great location in which to run high-profile campaigns that are aimed at the mass market, such as those pertaining to cancer charities and similar entities. The use of larger form, traditional billboards can also help charities to thrive in this market, which is incredibly competitive and packed full of organisations hoping to build awareness and raise donations.

You must always tailor your choice of locations to suit your charity and campaign message, however, as there may be instances where you want to target a niche audience or build awareness nationwide.

If you were looking to promote a less well-known charity like the Royal Society for the Protection of Birds (RSPB), for example, you may want to start by raising awareness in rural areas or target locations based on their core demographic profile.

Create a Campaign that Leverages the Flexibility of the OOH Medium

Whilst we’ve spoken repeatedly about traditional billboards, this type of ad should be considered as one part of an immersive OOH advertising campaign.

The reason for this is simple; as the OOH medium is incredibly diverse and can combine ads of all shapes and sizes to target a broad target audience.

To understand this further, let’s look at the WaterAid ‘To Be a Girl’ campaign, which ran on more than 3,000 buses across the length and breadth of the UK.

In terms of exposure, this campaign reached a staggering 30 million people during its time, whilst WaterAid recorded a staggering 59% increase in gifts from cold donors.

In addition to building greater awareness, this campaign also triggered a spike in online donations, which highlights the potential of OOH media as a key driver of assisted conversions across multiple channels.

This is a particularly interesting takeaway and one which also suggests that nonprofit organisations should look to create an integrated marketing campaign that combines the power of OOH with social media channels such as Instagram and Twitter.

The main lesson here, however, is the importance of using multiple OOH media channels (including billboards and posters) to optimise exposure and capture the attention of individuals at a time when they’re most likely to engage with messages.

Whilst there may be numerous differences between commercial and nonprofit organisations, both of these entities must look to promote their activities effectively if they’re to achieve their core objectives.

Charities must focus primarily on low-cost and effective marketing mediums like OOH advertising in order to remain within budget, however, whilst this type of channel offers a number of additional benefits to nonprofit groups.

By understanding these and taking steps to leverage the medium successfully, you can really raise awareness of your cause nationwide!