The Best Ikea Adverts Of All Time

The term ‘creative advertising’ is one that’s open to interpretation, while on a fundamental level it can be argued that all forms of marketing and promotion are inherently creative.

Some will even debate whether creative ads are actually more effective than simple product listings or specifications in many instances, but there’s no doubt that the former is capable of inspiring direct action amongst target audiences and eliciting a more emotive response from consumers.

Certainly, brands like Ikea are renowned for the impact of their creative advertising and how this inspires the marketing efforts within the industry. But what are the best historic Ikea ads of all-time, and what exactly sets them apart?

We’ll start with one of Ikea’s cheekier offerings, which was rolled out in the spring of 2013.

Here, the brand utilised a print ad to offer a free, flat-pack cot to babies that were born exactly nine months from the date that the promotion aired. What’s more, the advert was published on Valentines’ Day (February 14th), providing a cheek incentive for couples to enjoy some intimacy on the most romantic day of the year!

There are plenty of takeaways from this eye-catching and tongue-in-cheek ad, the most obvious being that creativity doesn’t always revolve around complex visual designs or intricate wordplay. 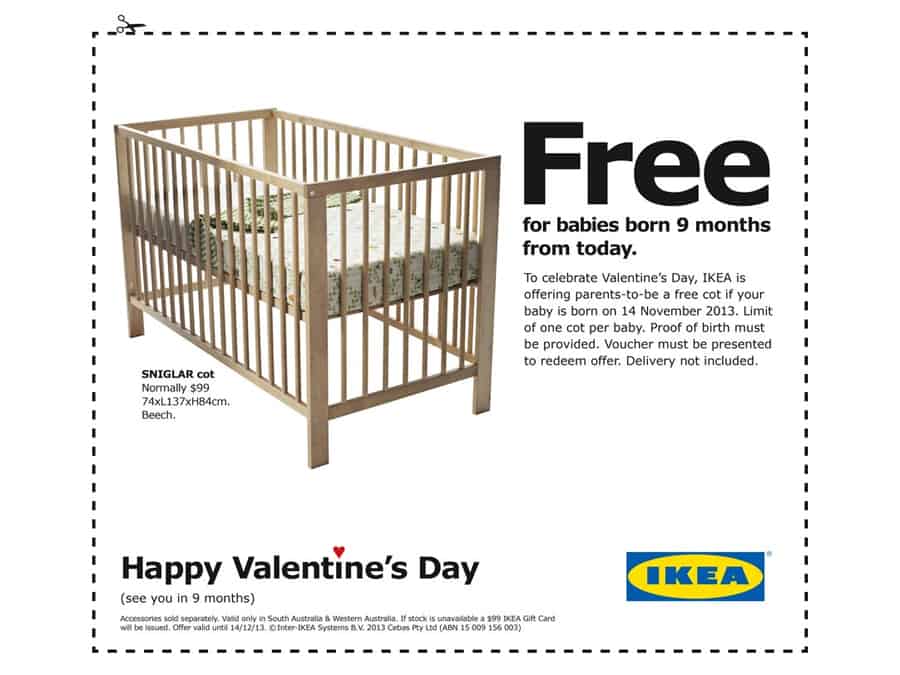 Instead, it can relate to the theme of a particular advert and innovatively tap into a specific event or occasion, as a way of building awareness and generating positive PR in a seamless and cost-effective way.

Because of this, Ikea was also able to produce a creative ad that was utilitarian in nature, achieving a balance that’s particularly difficult to strike in the eyes of customers.

Similarly, the use of print media and a newspaper ad was also striking, as this represents a genuinely creative use of the platform and reaffirms the importance of offline advertising as part of an integrated campaign in the digital age.

This is particularly important when looking to build brand or product awareness, as such an approach increases your reach as a brand and optimises the overall customer journey.

Modern-day customers are more discerning than ever before, particularly when it comes to the value of products and how they spend their hard-earned cash.

Ikea tapped into this seamlessly with their similarly utilitarian “It’s That Affordable” campaign, which sought to highlight just how competitively priced selected Ikea products were when compared to the regular (and often mindless) purchases that we make on a daily basis.

More specifically, Ikea produced a comparative analysis of its most popular and competitive products, reaffirming the idea that you can buy robust and brand-new furniture for the cost of a few cups of coffee or a single six-pack of soda cans.

Driven by the Ogilvy and Mather ad agency, this was yet another print campaign that combined an unusual theme and narrative with simple visuals and concise messaging.

It’s also increasingly in tune with the self-aware and knowledgeable customer mindset of the digital age, as households look to make the most of their income and try to achieve optimal value for their hard-earned cash.

Most importantly, this type of simple and easy-to-comprehend ad challenges the spending habits of customers, while encouraging them to prioritise affordable and practical purchases over everyday, relatively frivolous alternatives.

Ikea is renowned as a brand that’s regularly the first to market, whether this is from the perspective of its product offerings and pricing to the way in which it advertises promotions.

It was also among the very first online furniture stores to integrate augmented reality (AR) into its marketing efforts, achieving this objective as long as 2013.

Augmented reality refers to an interactive technology that combines three-dimensional graphics and computer-generated animations with real-world environments. It’s therefore an ideal tool for marketers, who can create digital representations of their products and enable customers to interact with them in the comfort of their own homes. 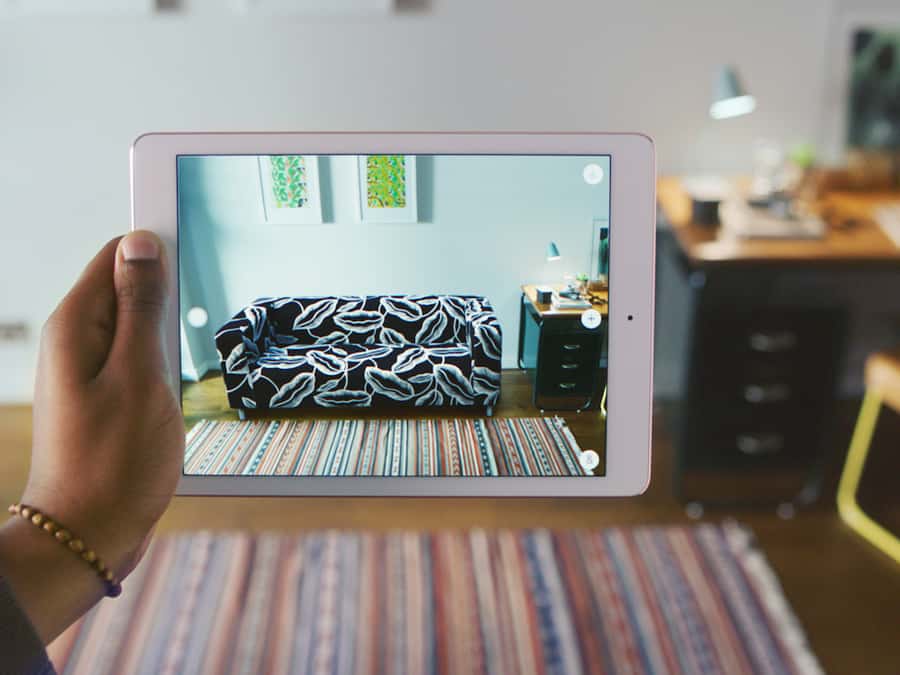 Ikea’s efforts involved the launch of a catalogue feature called ‘Place in Your Room’, that enabled users to try out listed products by placing them directly in their homes.

Once again, this advert walked the fine line between creativity and the principle of utilitarianism, as while it provided an immersive and interactive online experience for customers, it also made it easier for individuals to select the right size and style of furniture for their space and make more informed purchasing decisions.

This ensured the success and appeal of this ad campaign, which was highly effective and capable of providing Ikea with a clear and transparent advantage over their most ardent rivals.

As long ago as 2016, almost 70% of US Millennials operated an ad blocker on at least one of their electronic devices, with this trend prevalent across much of the Western world.

This suggests that there’s a growing cynicism surrounding sponsored messaging in the digital age, and some may also argue that this sense of mistrust also extends to the use of certain technologies and high-end devices.

Ikea was onto this by 2015, with their innovative ‘BookBook’ ad campaign creatively presenting its annual, high-resolution catalogue as a new and cutting-edge alternative to e-books (which were all the rage at the time).

Both brilliantly funny and sarcastic in its tone, Ikea’s printed BookBook was marketed in inventive technological terms, referring to an expansive interface (the book can be opened and closed, after all) and its convenient wireless design.

This ad definitely highlights the appeal of fun and tongue-in-cheek advertising, which is known to humanise brands and create an emotive connection between businesses and their customers.

This was definitely the case with this promotion, with the advert in question receiving a staggering 12 million YouTube views and capturing the imagination of a large and diverse potential consumer base.

What’s more, the ad was aired to coincide with the release of Apple’s coveted iPhone 6, underlining the impact of Ikea’s messaging further while creating far greater and more insightful context.

As we can see, not all marketing campaigns are created equal, and it’s fair to say that Ikea has tried its hand at almost every conceivable advertising technique throughout the years.

The brand has even sanctioned a guerilla marketing campaign in the past, with its ‘Moving Day’ promotion launched in Quebec and providing a fully interactive OOH (out-of-home) experience for passing customers.

This campaign included everything from free boxes that could be used to package possessions and re-used as household objects, to moving checklists and special dinner promotions for those who have yet to set up their new kitchens. 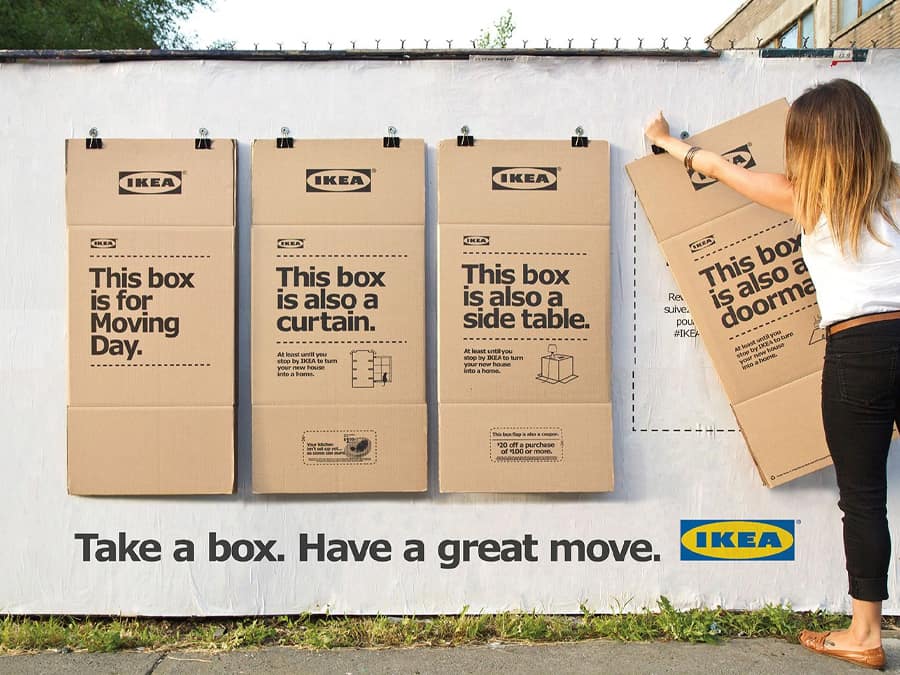 This highly practical and interactive offering also made a provision for discounted Ikea furniture offerings in the future, which would most likely translate into future sales and the creation of a more engaged customer base over time.

Clearly, the discounted offer for flat-pack furniture was the epicenter of this subtle campaign, but Ikea was able to avoid being overly promotional while maintaining a clear and obvious message.

This affords a huge advantage to brands in the modern age, where customers are increasingly cynical of market-leading brands and corporations and their efforts to engage consumers.

Next up is one of Ikea’s boldest and most innovative promotions, and one that had a rather unusual request for female customers.

Created by the Swedish agency Akestam Holst, this 2018 ad ran in the popular Amelia magazine, while it could be seamlessly removed from the publication to serve as a functional pregnancy test!

So, women were asked to simply detach the ad and pee on it as they would a normal pregnancy test, with a special 50% discount code relating to flat-pack cots revealed if a positive result was delivered.

Running the simple tagline “peeing on this ad could change your life”, this creative, tech-led ad campaign truly captured the imagination of consumers, while once again highlighting how marketing material can be highly practical and utilitarian without compromising on its ingenuity or impact.

Of course, the ad also demonstrates the unique understanding that Ikea has in relation to its individual consumer demographics, which affords the brand a huge advantage in the digital age.

Above all else, this highlights the importance of creating eye-catching and novel campaigns that also hold tangible value from the perspective of customers, which is a difficult balance to strike (especially across multiple marketing channels).

And now, as Month Python would say, “for something completely different”!

Most of the ad campaigns referenced above were either fun or tongue-in-cheek by nature, but this Ikea effort (which was also the creation of Akestam Holst) adopted a much more serious approach that focused on the more mundane, but similarly emotive, elements of everyday life.

So, instead of showing happy, joyous people or individuals or focusing on positive elements of family life, this campaign targeted the reality of coping with tough, real-life situations and the role that Ikea played in this regard.

For example, one ad saw a divorced dad struggling with separation decorate his room to replicate the one in his mother’s house. Another, entitled ‘Enough’, showed a stressed and overworked mother come home to a messy house full of teens after work, but as she leaves her son recognises her pain and helps to clear up.

These ads focus on gritty and emotive narratives, while various Ikea products and furnishings appear frequently and seamlessly in the background.

Product prices appear on screen as each product takes centre stage, creating subtle but non-intrusive prompts that serve as a viable call-to-action and fulfil the advert’s core commercial purpose.

Ultimately, this ad reaffirms the importance of creating emotional hooks with which to engage customers, while highlighting how relevant and creative product placement can work across multiple marketing mediums.

In truth, there are a myriad of famous and highly creative Ikea ads, with the above promotions representing a relatively small (albeit impressive) collection.

These adverts referenced in this list certainly tick a number of boxes from a marketing perspective, whether you consider their ability to elicit an emotion from customers or their unique combination of creativity, invention and utilitarianism.

There’s certainly plenty of lessons and inspiration that marketers can take from Ikea’s best and most creative ads, regardless of their size, scope or the industry in which they operate.